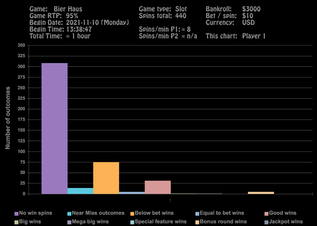 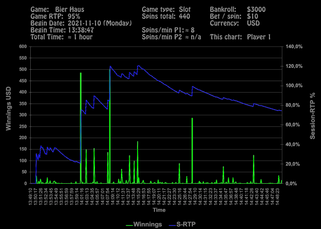 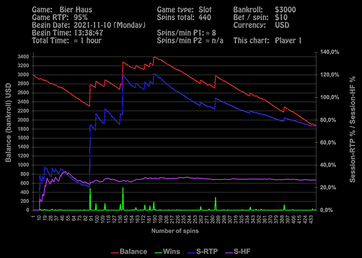 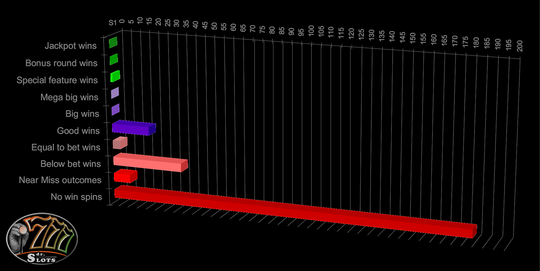 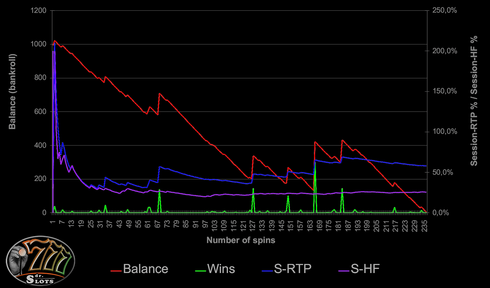 Above, chart of: ZEUS Lightning PowerReels

The graphical chart above was created using the data collected to mirror the slot game "ZEUS Lightning PowerReels".

If this game would be 100% random, the lines in this graphical chart would go up and down like crazy, especially the winning peaks (green). Instead what you see is a clear trend over time, and this would not be possible if the outcomes were totally random.

What is shown is a controlled slot game being in a very "cold" cycle designed to take your money in small steps, with or without the presence of a Pseudo Random Number Generator.

You are randomly(?) allowed to win prices equal and below your bet placed for each spin. A few better wins always exist as well as several "near miss" outcomes as a way of keeping you interested to stay and play the slot a bit longer. You will be fooled into believing a bonus game or a special feature win is coming up. This you need to learn how to see/detect, but to be able to do so you need to trust me first; that there's no randomness in the software/server controlled games, on- or off-line. Just have a look at the balance (the red line) in the statistical chart above.

If you have a look at the session hit frequency (purple), you clearly can see that even though the line is very even from spin nr. 67, the balance (red) is going down a lot, and this is because the "hits" are paying much less than the bet placed for each spin, but each hit, no matter how small the win is, is still counted as a "hit".

This graphical chart will also show you the importance of long pauses in between every spin, because that way you will skip a lot of the "below the bet" wins, but still hit some of the good wins. The time in between spins also depends on the type of slot game you're playing; if it's a high- or low volatility game where the number of spins per hour of course should be much less compared to the low volatility slot games. You can also see for how long a "cold" cycle can go on, but it can be much worse than this with a really high volatiliy slot game.

Do you still believe the slots are 100% random?

This is exactly why I say TIME is your most important variable while playing the slots. The balance between the pause time in between the spins and the bet placed for each spin is also of great importance.

What is a statistical report from real live slots play?

online. At the end of the report the whole list of spins/game

rounds is added with all data included for each spin initiation,

for one or two players depending on the report type ordered.

For only each spin; 37 data variables are collected if there's two

players, and 26 data variables if there's one single player in the

But this is worthless because the slots are random, right?

Actually, the slots have controlled randomness (not that random at all),

meaning when and what you are able to win is pre determined by the logical and economical functions in the slot software and the game design, in the software of a server controlling the slot game you are playing. This is because the need to be able to control the money flow in and out of each slot game, or any other software/server controlled game, online and in landbased casinos. The program I use (developed by me) to collect all information actually proved to me that I was right all along, because the two first statistical charts I was able to create from using my own software showed me the horrible truth, that the slots are actually almost 100% controlled. This was my first proof of what I thought actually was true, and that session I ran had two players on the same slot game at the same time, the only difference between the players was the number of spins per minute, and guess what; the one player with only four spins per minute did much better in the end than the player that had eight spins per minute. So you be the judge, because let me tell you; numbers don't lie.

Who is the statistical reports for?

First I would say it's for anyone who is playing the slots regulary, like a few days of each week or more than that. Remember that I want to help the players. For those who are playing the slots a whole lot more, like for example professional gamblers (mid- and high rollers), the information is of great interest becuase it will reveal information about their favorite slot machines, both in land based casinos and online casinos.

Of course, anyone being interested in anything regarding how any slot game functions will love these statistical reports. I can absolutely see that this knowledge would be of great help and importance for those who are working with anything regarding problem gamblers. As I'm saying; let them know the true terms of which they decide to play and gamble on software and server controlled games. Then there's of course slot channels on Youtube and other media (streaming) platforms that I'm sure would be really interested in these reports. I believe media and the news channels all will be very interested in knowing about how the slots hide the truth.

Why is it so interesting to see the statistical information about any game?

The answer is: because numbers don't lie, and it is possible for you to use this information to raise the odds when playing software/server controlled games.

The statistical report will show exactly how a slot game behaves and how it is designed, because by collecting all this data, it mirrors the design and behavior of the game. This is possible because the slots are NOT 100% random. Since you are presented with ane hour or more of game play, you can for example compare it to another statistical report that was created another day and/or time. This means it actually is possible to... well, gamble smart I would say.

How is the data collected?

All the data is collected from any online software/server controlled game, mostly slots, by using a program designed, developed and programmed by dr.Slots. The program has smart functions that helps when many spins per minute must be initiated, and the program also calculates some data and saves a whole lot of information for each spin.

What kind of data is collected?

All that can be collected. There's so much data collected

and calculated from each spin that it would be impossible

to calculate and write it all down by hand. It needs to be

done quickly to be able to initiate the next spin in time.

Total number of data variables for one session

So if you do the math; let's say there are 480 spins in total for one hour, then if there's one player the total collected data values are 12.480, and for two players there are 17.760 data values collected and saved, excluding the overall data variables.

Now that is a lot of information to collect for each spin, and to process and save during a few seconds, don't you agree? The total time to save each spin because of some needed user input is about two seconds +/- one second.

it may take around four seconds +/- several seconds, to save

each spin. This is because sometimes there's a need to wait

for the spin to end and there might be other features

taking some time depending on the game itself.

How does the program help, what are the functions?

The program helps by speeding up the process to gather

all data and then calculate and save all these values

between each spin. Because this is a sensitive subject

that generates a huge interest in the whole casino

industry, I will keep the functions of this software

to my self. However, I can tell you that the program is

updated all the time with even smarter functions, and I am

sure the results will blow you away even more in the future.

!! Message to the media, gaming control boards, authorities and others alike

Since these charts may be of great interest to those who wanna know the real behavior of server and software controlled games that handles real money, I am more than open to discussions regarding both business and other ideas to be able to get this information out to the public, because this is my actual goal.

There's two sides of these reports where one side is to help gamblers to play smarter and lose less money, and the other side is for those who has control responsibility in their work regarding landbased- and online games that are server and software controlled. These reports are probably as close to the truth as anyone will ever get.